MY PATIO GARDEN - PART ONE

I recently sold my Tustin condo and bought another condo in Santa Ana.  This time unlike the last I have a patio (right picture) that I get to landscape.  Although the patio is in full sun with concrete (cannot be removed per HOA rules) at least it is a space that I can have planters in and whatnot.  For me being finally able to have my own garden is exciting and much like any other client I created a drawing so that I could see exactly how much space I have to work with.  The total area is 100 square feet.  Small with a lot of potential.

I started by measuring the space and digitally creating a site plan.  Then I (digitally) drew two options based on what I was looking for, budget and what would realistically work.  I also have a homeowners association, so I had to take into account their rules and guidelines (in my case it was not that bad). 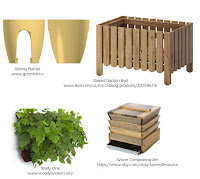 In designing this space I knew that I wanted not only a California native garden but also an edible one and since I can't plant in the ground I was thus limited to containers.  I decided to have some raised garden beds that I found reasonably priced at Ikea.  I also had some Woolly Pockets, a beige Greenbo railing planter and a pair of green metal chairs from my old place that I wanted to reuse.  I also want to try making a succulent pillow as a fun accent in the garden. Another cool feature that I am really excited about is being able to compost. I found this really neat worm composting system from this Etsy shop.  What I like about this system is that it is not made of plastic and looks decorative.

In regards to a color scheme I wanted to do something different than the interior of my space which consists of more reds, greens and browns.  The existing chairs are green (my favorite color) and the flowers will be a mixture of blue, purple, yellow and white.  I also found really cool green/white/blue outdoor pillows at home goods along with some cool decorative accents. 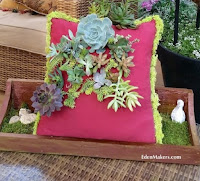 The idea is to plant natives in the raised beds and edibles in everything else.  Some of plants I intend on using are:


In regards to budget...  I knew that I would spend at least $500 on the materials but do not want to go over a thousand.  If you think that spending a up to a thousand is too much, it's actually not when you consider quality.  I could have bought a cheap plastic worm composter but plastic is really harmful to the environment and looks cheap.  The next phase is to purchase all the materials and begin assembly. I am going to buy everything but the plants and get them in place and take one last look to make sure that my plant palette works with my end goal in mind.  Stay tuned as I post updates on my garden transformation.
Posted by creations landscape designs at 3/28/2016