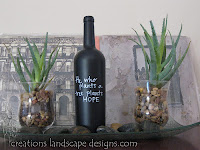 In April I had made a blog post about planting Dudleya's and Aloe's indoors.  My theory was that they could not only survive as an indoor plant but also survive the wrath of my two felines.  I also wanted to prove that you can grow California native plants indoors and still be able to have a native garden even if you don't have land to garden in. 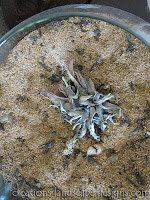 For the most part most of the containers did well. I watered each after planting them and have not watered them since.  As you may be able to see my cats did get into the Aloe's but did not do much harm.  They do occasionally like to sniff the plants and play with the sand or rocks but thankfully not often enough.  One container that I have placed on my bedside table was the only plant to not do well.  I will have to take this one Dudleya and transplant it outside in hopes of saving it.  We shall see.

The way I see it is that planting much like life is an experiment.  Some things work and some don't but you will never know unless you try.  My next mission is to plant other types of natives indoors.  We shall and I will keep you posted.

On a side note:  The wine bottle chalk board is from Nook And Sea.
Posted by creations landscape designs at 6/05/2012