I was hired by a client in Irvine to create some concept drawings for her (and her husbands) back yard. This was exciting because it's a blank slate, which means that there is not much there to work with other than some existing shrubs and trees. There used to be a pool, which they had filled in prior to contacting me and the existing narrow concrete walkway just won't cut it.  Starting over yet keeping the existing trees and some shrubs is the only option.  This was a challenge that I was game to take on. 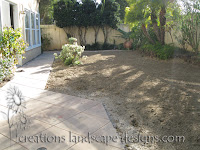 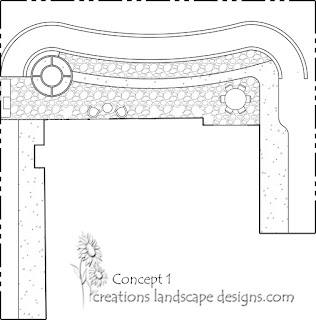 The first concept has curved (raised) planter walls but still visually keeps the rectangular feeling of the space. To the left there is a fire pit and proposed (freestanding) BBQ area. While I like that there are no hard edges, I felt and the client agreed that there was something missing. How do you make a rectangular space look less so without creating any walls (not enough room in budget to do that)?  This question led to the second concept. 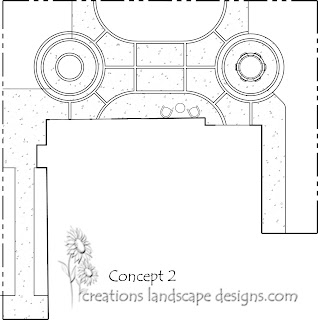 In this second idea there is still a fire pit (with seat wall) and an area for a freestanding BBQ but the fire pit paving layout is mirrored on the opposite side of the yard.  While this does limit the planting beds it does however visually break up the space and make it feel less rectangular.  This is the final concept that the client and her husband really loved.  Next step is to create a plant palette which will be a combination of California natives and existing plants.  The trick will be making those existing non natives work with the new plants.
Posted by creations landscape designs at 2/15/2013

Thank you Beazer. I will post updates as I have them.