LADY BUGS IN MY GARDEN 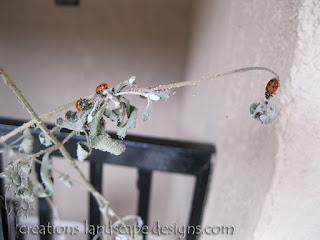 The Cleveland Sage and Coyote Mint in my garden were covered with aphids and little white mealy bugs.  I wanted them gone but did not want to use any chemicals.  So I thought of the next best solution that is lady bugs.  Yep those red and black cute little critters love eating the exact type of bugs that I have and they are not that expensive.  I bought a box of roughly around 2000 at Armstrong Gardens for around $9 + tax.  I knew that they may not remain in my garden long term but at least they would be a short term solution to the issue.

Some facts about incorporating them into your garden: 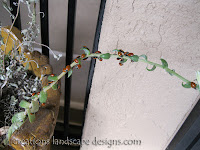 I was also told that I could use soapy water to get rid of the bugs, which I am sure will work but I was attempting for an all natural solution first.  If the problem persists then I may have to resort to the soapy idea but for now I am glad that the lady bugs are here and eating all those pesky bugs.

Posted by creations landscape designs at 5/30/2012

I've always heard that lady bugs are helpful in the garden but it really helps to read it from someone that studied it first-hand. Thanks for sharing. I'll be sure to treat my ladybugs extra special from here on out. :)