My friend and plant nerd Christian was reading this article on MSNBC about a building in Portland Oregon and he forwarded it to me and I just had to share. This is by far the biggest vertical garden project I have seen or heard of. 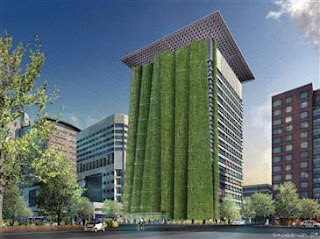 "The architects' plans call for seven vertical "vegetated fins" to jut at acute angles. The fins would be the metal framework for planters and the greenery sprouting from them. The west wall is 150 feet long, making the expanse to be shaded about three-quarters the size of an NFL playing field, minus the end zones. The work is part of a $135 million remodeling, with most of the money from federal stimulus funds. It is the largest single stimulus project announced so far in Oregon. The U.S. General Services Administration says its goal is to create a landmark high-performance building."

As much as I love the idea of a giant vertical wall I definitely don't want to be the person who has to prune it. hee hee

Click Here for the full article.
Posted by creations landscape designs at 1/19/2010