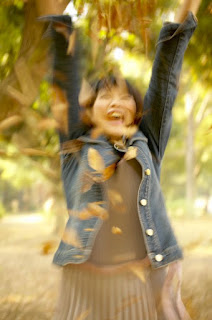 Fall is a great time to zoom in and look at whats around you. From the leaves that have just fallen to the snails and other insects, it's nice to take a moment to just be. Free as a bird. Think about it! How much time do you spend inside watching t.v.? That time could be better spent out side dancing in the leaves. Kick them around a bit. They won't mind. I was sitting amongst the leaves pondering my next move when out of no where it jumped up from under the leaves. A spider. Natures Architect. I was close to it's web. A most magnificent find. How is it I wonder that they catch the prey. Well the web is sticky so things get stuck and it becomes a struggle to break free. As it tries the web vibrates telling the spider that there's a meal waiting. A feast is near. Other things you can do with your kids are the roly poly races. OK what you may ask? Well. Draw a circle in the dirt and put two or more roly polies in the center and which ever makes it out the circle first wins the game. Did your roly poly win? Or did your kids beat you?